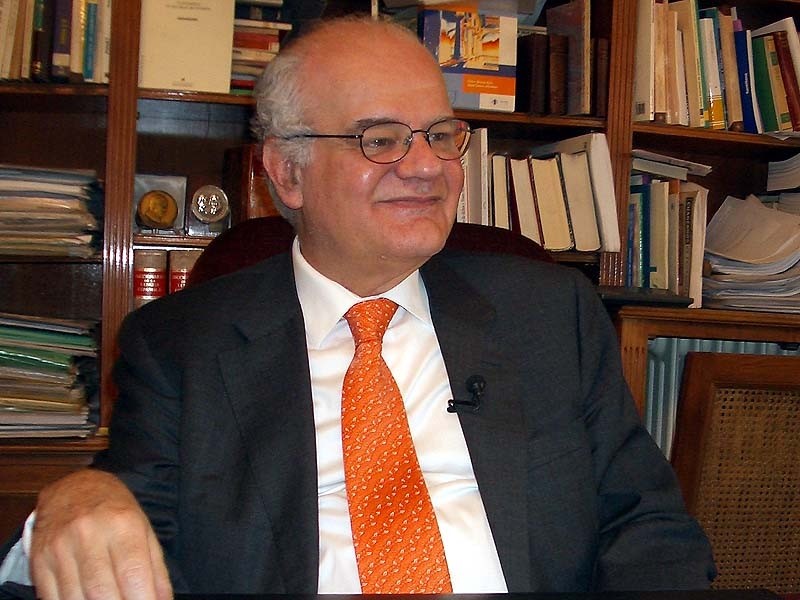 Elements of the Curriculum Vitae

At the moment he is the Vice-chancellor of the Universidad Internacional de La Rioja.

His educational career began in the secondary education, being a professor in different private centers, and in 1964 he won a secondary education Philosophy chair, having exercised in several places, also as Director of a Filial Section. Then in 1968 he began to work as Assistant Professor in the Universidad Complutense, where he has been through the whole educational scale and in 1980 he obtained the university chair of Philosophy of the Education. Furthermore he was part of the first teaching staff of the Universidad Nacional de Educación a Distancia, in which he worked a triennium since its beginning, in 1973, becoming the Vice dean of the Faculty of Philosophy and Sciences of the Education. He also has the Philosophy of University Schools full time Professor's title. He has been the creator and Director of the “Moral education and civic education in the educational system" course that enabled to receive the graduated degree of Specialist for the Universidad Complutense, and in which students from ten different countries participated during the years in which it was given.

He was named Professor Emeritus of the Universidad Complutense in 2010, receiving then the Educational Merit Medal of that University.

The 21 of December of 2013, the King Juan Carlos I granted him the Alfonso el Sabio Great Cross, the highest award in the education, science, culture, teaching and investigation field.

His research lines have been centered in the study of the anthropological bases and the critical-philosophical assumptions of the educational processes, in the education policies and educational legislation, with special reference to the European case, in the civic formation inside the democratic systems and in the ethics and professional ethics in educational activities. On this group of concerns he has published more than hundred and thirty works in five different languages, he has had an excellent participation in more than fifty congresses taken place in ten different countries and he has given more than two hundred fifty conferences.

It is maybe necessary to highlight his concern for the international dimension, which has taken him to organize and to preside over eleven international scientific meetings, being the last ones the International Symposium of Philosophy of the Education: "Ethical-civic learning in Virtual Environments", 2014, and the VII International Congress of Philosophy of the Education, in 2012, in those have participated as speakers more than thirty professors of thirteen different countries, one of them in San Francisco; likewise he has given conferences or has remained as Invited Professor in eleven foreign Universities and a Spanish one, especially in Stanford University, California, where, adding diverse stays,

As consequence of his research activities, he has been rewarded with the following prizes:

Award Raimundo Lulio - of the Superior Council of Scientific Investigations, 1972-

Award of the Santa María Foundation -1989-

In this area his work stands out in a very significant way in the scientific journals, mainly regarding the management of the Revista Española de Pedagogía, in which he succeeded Victor García in 1982, and he is performing to this day, having been able to transform it into a international reference, which has made it to be the first one in Spanish language

included in the world’s best databases, as the Journal Citation Reports.

He has been Member of the Rapporteurship of Social Sciences, of the Agencia Nacional de Evaluación y Prospectiva, from 1997 to 2000 and President of the Rapporteurship of Social Sciences, of the National Agency of Evaluation and Prospective, from 2000 to 2001. Equally he was named Member of the ANECA experts committee to evaluate the applications presented to be credited as University Professor or Full, Professor, in the Commission of the Social and Juridical Sciences Knowledge Branch, from his beginning, the year 2008, until the present, and Member of the Italian National Agency for the Evaluation of Universities and Research Institutes (ANVUR), from 2012.

He was appointed as North American external examiner by Boston University to select candidates to a chair in its School of Education. Equally, in 2012 and 2013 he participated in a Tribunal to judge university professorship at Portugal.

For four years he was the head of the National Board of Education, from 1981 to 1985. In 2004 he was appointed as member of the School Council of the Comunidad Autónoma de Madrid, in representation of the Madrid’s Universities. He has been part of the National Prizes of Educational Investigation Jury in 1996, summoned by the CIDE.

An analysis of prof. Ibáñez-Martin´s curriculum vitae shows several of the elements that define the university professor of our days: love to teaching, concern to facilitate the learning, the selection and training of the best students to help them to embrace the university teaching (among the doctoral thesis he had directed, five obtained Extraordinary Prize), knowledge updating, broadmindedness and opening of new horizons in research, presence in the international scientific discussion and disposition to occupy management’s positions in the University, from an attitude of service instead of a power one.

Furthermore, the works of the prof. Ibáñez-Martin, exhibit a specific form of understanding the philosophy of the education and the education policies. A philosophy of the education able to enlighten the performing of the teacher, identifying their essential purposes, respecting the dignity of the student, and promoting the exercising of prudence, overcoming the error of believing in presumably effective recipes. And an education policy that, recognizing the variety of positions that the different political sensibilities may held, it is characterized to reconcile the search of the common welfare with the attention toward the citizens legitimate aspirations and initiatives that, in a democratic society, wished to express.

The revista española de pedagogía is present in the leading Spanish and international databases, such as Journal Citation Reports (JCR), Scopus, JSTOR, etc. In fact, it was the first Spanish journal to appear in JCR, where 95 per cent of the journals in the Education and Educational Research category are only available in English. Consequently, since 2017, the revista española de pedagogía has also made all of its articles and book reviews available online in English.

All of the articles published in the journal since it was founded in 1943 are available on this website. Articles can be downloaded for free apart from ones from the previous year.